THe Crow here for c4ocradio.com 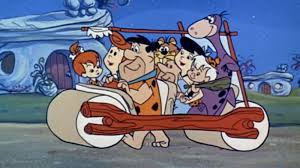 Fred Flintstone joined celebrities in trouble with the law when a sheriff’s deputy in Pasco County, Florida, pulled him over Nov. 4 for speeding in a Wesley Chapel housing development. He was nabbed in a Smart car customized to look like the foot-powered caveman car seen in the 1960s cartoon series, according to local local station WPTV. Police identified the driver as Mr. Fred Flinstone (sic), and said his real name is Don Swartz.

That’s a Yabba Dabba Don’t! The sheriff’s office said in a Facebook post that Flinstone (aka Swartz) “became irritated” after being issued a speeding citation, the barefoot driver “became unruly” and had to be detained, the Pasco County Sheriff’s Office said. He was later released with a notice to appear in court. “This is what Intelligence-Led Policing looked like in the stone age,” said the post, which included pictures of the vehicle and a barefoot driver dressed in Flintstones garb. The post jokes that the prehistoric Smart car was seized and is now part of the police fleet.