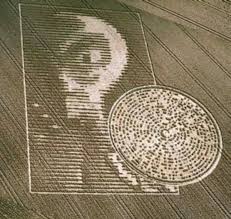 Donald Trump may not want to look out the window as he passes over the English countryside. An artist has turned part of a field at Moat Farm in Stoke Mandeville into a 650-foot crop circle with “Fuck Trump” written in Russian, according to local newspaper http://Bucks Herald. The massive message should be visible from the left window of Airforce 1 chopper. The crop circle should be visible as the president flies to a meeting with Prime Minister Theresa May  The meeting will take place at Chequers, the premier’s country home. President Trump will see the crop circle as he flies  to the Prime Minister’s country house on Friday. The word literally means “whore,” but is often used more broadly, according to The Russian Blog.

The Herald said the unnamed artist paid a farmer to use the field. The farmer himself ― also unnamed ― doesn’t seem to care about the politics of it either way. “For me it was a transaction between myself and the artist.” People have asked me this, but my thoughts on Trump are completely neutral,” he told the Herald.  “All in all it took about two weeks to design, and over 12 hours to make on a sweltering day.” “A lot of planning and drawing was involved by the experts who made it,” photographer Henry Matthews, who captured images of it with a drone, told Metro. He was a little more direct than the farmer when it came to sharing his feelings about Trump.“It would be fake news if I said I like the guy,” he told Metro.