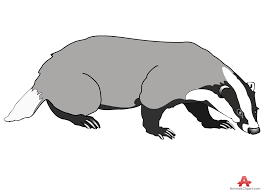 Portions of a 16th-century Scottish castle were recently closed to the public due to a “very angry badger .”It’s like something from a Monty Python sketch” Craignethan Castle’s tunnel was closed last week because of the animal.   The badger apparently wandered in from the nearby forest, as per the BBC and Historic Scotland, which manages the property. It’s not clear what the animal did to leave the impression that it was “very angry”: Saturday revealed that Historic Scotland’s cat food plot may have worked, the creature appeared to have fled the scene, observers on Twitter had suggested feeding it mushrooms, peanuts and peanut butter among other things. The badger dug through loose soil and stonework, leaving behind a mess the Scotsman reported.

Built in 1530, Craignethan Castle, noted for its fortifications, which was built to protect it from artillery and considered to be ahead of it’s time. Although a rampart was demolished in 1579, its ruins remain on the grounds. While they are generally not aggressive toward humans,  a wounded or cornered animal may attack=Badgers are Scotland’s largest wild carnivores.