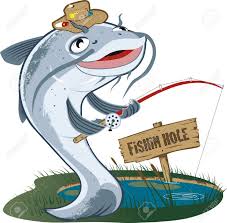 BERLIN — A German city is looking for a way to get rid of a giant catfish that is believed to have developed a taste for ducklings. The fish, apparently ate all the other fish before moving on to ducklings. The 4.9 foot (1.5) meters, fish has been making waves in Offenbach, near Frankfurt. News agency dpa News reported Monday, according to the city government, that it has found a professional angler to catch the fish, first seen about a year ago, but a formal contract has yet to be signed.

The city plans to have its unwelcome guest caught alive and taken to a private pond somewhere, but officials will first have to be satisfied that it can’t escape into flowing water and that its new home is suitable for a catfish. On a much lighter note, catfish mysteriously falls from sky and hit woman in the face, “One of the strangest things that have happened to me in my life.” A five pound catfish fell fifty feet out of a sycamore, dropped by a clumsy bald eagle, and hit Lisa Lobree in the face! Lisa Lobree was on her way to a Labor Day exercise class near the Philadelphia Museum of Art when she was suddenly “slammed by something,” the Philadelphia woman says she was knocked to the ground when a 5-pound catfish fell from the sky and struck her in the face.  Lobree told the http://Philadelphia Enquirer.  “I was like, ‘What!?’ I was freaking out,” she recalled. This wriiter thinks someone should have yelled, “lookout, It’s a bird! It’s a plane! It’s… a fish?