Officially named 2015 TB145, it”s a different kind of Halloween sequel in the works, and it’s coming soon to the skies near Earth. A skull-like asteroid that passed Earth in October 2015 is coming back for another visit in early November. The asteroid has been called The Great Pumpkin by NASA because of its Halloween flyby three years ago. 2015 TB145 has also been described as a “death comet” because it’s believed to be a dead comet and because of its skull shape, which was picked up on radar images from the Arecibo Observatory in Puerto Rico:

Despite the spooky appearance and nicknames, 2015 TB145 will pose no threat to life on Earth. Vishnu Reddy, a research scientist at the Planetary Science Institute, said “we found that the object reflects about 6 percent of the light it receives from the sun.” Reddy said in a 2015 news release. “That is similar to fresh asphalt, and while here on Earth we think that is pretty dark, it is brighter than a typical comet which reflects only 3 to 5 percent of the light. That suggests it could be cometary in origin ― but as there is no coma evident, the conclusion is it is a dead comet.” 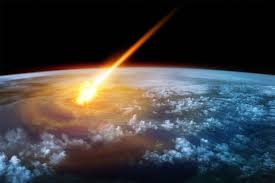