Thanks To New ‘Frog Ladders’ England’s Frog Population Could Jump 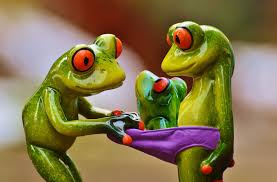 A small group of British conservationists, The Warwickshire Amphibian and Reptile Team — the memorably acronymed WART – are installing mesh- covered ladders in roadside drains to save trapped amphibians from certain death in hopes that by placing 20 of the rust-resistant aluminum ladders down drains near known breeding pools in England’s West Midlands, they can boost the dwindling amphibian population. “By installing the amphibian ladders, it enables them to get back out of the drains and back to their breeding pools and doing what they should do and making more amphibians,” one frog lover said. “The amphibians are coming to breed and then hitting the road, getting across the roads, hitting the curb, along the curb and into the drains. And then that’s it – end of story for them, game over,” said Tim Jenkins, a ladder fitter at WART. And the issue of trapped toads is not limited to Britain, a 2012 study in the Netherlands estimated that more than half a million small vertebrates like frogs, toads and newts end up trapped in gully pots and drains each year.

It is one of the factors, along with habitat loss, that is blamed for common toad numbers declining by 68 percent in the UK over the past 30 years, according to a 2016 report by the conservation group Froglife. Each of the ladders designed by the British Herpetological Society costs 15 pounds ($20), a large price for a local conservation group. The group hopes their endeavors can inspire other conservation groups in the UK to help the oft-maligned critters. WART says it’s seen a drop in the number of amphibian prisoners since the ladders were installed, but there is a limit to how much they can do. They’re absolutely excellent for gardens because they eat lots of invertebrates – potential pests in your garden,” Jenkins said. “They’re an overlooked species and they have their role in the ecosystem.