What An Incredible Row It Is, Duck Gets Babies In A Row

An amateur wildlife photographer took some photos and now the internet, and the rest of the media world just can’t get enough of the waterfowl, a mama duck took some babies for a swim on Lake Bemidji in Minnesota, the photographer, Brent Cizek, who captured the image of the adult common merganser taking dozens of ducklings, “(the number of ducklings:” 76). for a swim also has something to do with it. Cizek told The New York Times that he didn’t know that a duck could care for that many chicks, he first spotted the ducks in late June. “It was mind blowing,” he said. Actually, it’s not so uncommon, the National Audubon Society says on its website, if ducklings get separated from their mothers, they will instinctively follow another hen. Ducks often lay eggs in other nests in addition to their own, said Kenn Kaufman, field editor of Audubon magazine. The mother duck will probably care for this crèche for a couple more weeks, the Audubon Society said. Wildlife photographer @brentcizekphoto recently captured this incredible photo of a Common Merganser mother with an adopted brood of 50+ chicks! here are a few pictures this species: 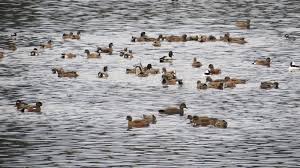 David Rave, a wildlife manager for the Minnesota Department of Natural Resources, told The New York Times that the common merganser is one of a number of birds that employ a sort of day care system known as a crèche. Essentially, hens leave their ducklings in the care of an older female duck that has experience raising babies. In the meantime, hopefully Cizek continues posting photos of this extended feathered family. And Cizek teased on Twitter that there might be a sighting of the mama duck on “The Tonight Show” on Friday night. “Can’t get enough of Mama Merganser”? Be sure to watch @jimmyfallon Friday night! I’ve heard she makes an appearance.